Founded when gold was discovered in the area in the late 19th century, Johannesburg quickly grew into a bustling metropolis, South Africa's largest city and the region's economic hub.

Explore hidden gems such as Ukutula Conservation Center and Zipline. Get a sense of the local culture at Hector Pieterson Museum and Sterkfontein Cave. Change things up with these side-trips from Johannesburg: Nan Hua Temple (in Bronkhorstspruit), Historic Motorcycle Museum (in Deneysville) and Pretoria (Melrose House, Sammy Marks House, &more). There's still lots to do: take an in-depth tour of Lesedi Cultural Village, view the masterpieces at I was shot in Joburg, steep yourself in history at Kromdraai Gold Mine, and admire all the interesting features of Nelson Mandela Foundation.

To see reviews, traveler tips, and other tourist information, refer to the Johannesburg attractions planner.

Berlin, Germany to Johannesburg is an approximately 16.5- hour flight. You can also do a combination of train and flight. The time zone difference moving from Central European Standard Time to South Africa Standard Time is 1 hour. In June, daily temperatures in Johannesburg can reach 22°C, while at night they dip to 5°C. Finish your sightseeing early on the 17th (Mon) to allow enough time to drive to Butha-Buthe.
more less

Things to do in Johannesburg 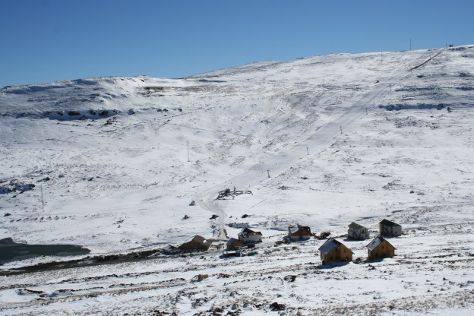 ©
Butha-Buthe is the capital city or camptown of the Butha-Buthe District in Lesotho. On the 18th (Tue), fly down the slopes at Afriski Mountain Resort.

To find other places to visit, more things to do, photos, and tourist information, read Butha-Buthe trip itinerary tool.

Traveling by car from Johannesburg to Butha-Buthe takes 5 hours. Alternatively, you can do a combination of train, flight, bus, and car; or do a combination of bus and car. Traveling from Johannesburg in June, expect little chillier with lows of 0°C in Butha-Buthe. Wrap up your sightseeing on the 18th (Tue) to allow time to travel to Upington.
more less

Things to do in Butha-Buthe

©
Upington is a town founded in 1884 and located in the Northern Cape province of South Africa, on the banks of the Orange River. Start off your visit on the 19th (Wed): stroll through Tierberg Nature Reserve and then get engrossed in the history at Kalahari-Oranje Museum.

To see reviews, where to stay, more things to do, and other tourist information, go to the Upington online attractions planner.

Drive from Butha-Buthe to Upington in 8.5 hours. Alternatively, you can do a combination of car and flight. Expect a bit warmer temperatures when traveling from Butha-Buthe in June; daily highs in Upington reach 25°C and lows reach 5°C. On the 20th (Thu), you're off to Cape Town.
more less

Things to do in Upington

Deepen your sense of the past at sights like Dorp Street and St Mary's Cathedral Parish. Escape the urban bustle at Chapman's Peak Drive and Twelve Apostles. Explore the numerous day-trip ideas around Cape Town: !Khwa ttu (in Yzerfontein), Suider Paarl (Fairview Wine and Cheese & Spice Route Destination) and Topiary Wines (in Wemmershoek). Spend a fascinating day underwater on the 27th (Thu) with a shark diving experience. The adventure continues: see the interesting displays at The Springbok Experience Rugby Museum, enjoy the sand and surf at Bloubergstrand Beach, get curious at Stellenbosch University Botanical Garden, and do a tasting at Waterford Estate.

To see ratings, more things to do, maps, and tourist information, you can read our Cape Town online vacation planner.

The Route module can help you plan travel from Upington to Cape Town. Expect slightly colder weather when traveling from Upington in June: highs in Cape Town hover around 20°C, while lows dip to 9°C. Wrap up your sightseeing on the 28th (Fri) to allow time to travel to Plettenberg Bay.
more less

Things to do in Cape Town

As one of South Africa's most popular beach destinations, the resort town of Plettenberg Bay comes to life in December and January, when the holiday homes fill up with domestic tourists and foreigner visitors.

To find reviews, photos, where to stay, and tourist information, go to the Plettenberg Bay day trip tool.

Fly from Cape Town to Plettenberg Bay in 3 hours. Alternatively, you can do a combination of flight and bus; or drive. June in Plettenberg Bay sees daily highs of 22°C and lows of 12°C at night. Finish your sightseeing early on the 5th (Fri) so you can take a bus to George.
more less

Things to do in Plettenberg Bay

Benefiting from a pleasant climate and prime location on the Garden Route, the town of George serves as the Southern Cape's premier tourism hub.

Explore hidden gems such as Outeniqua Transport Museum and Wilderness National Park. Deepen your sense of the past at sights like Dutch Reformed Mother Church and Montagu Pass Old Toll House. Explore George's surroundings by going to Mossel Bay (Shark Diving & ReedValley), Hartenbos (ATKV’s Hartenbos Museum & Janine Iron and Washing Museum) and Oudtshoorn (Arbeidsgenot & St Jude's Anglican Church). There's much more to do: kick back and relax at Wilderness Beach, browse the exhibits of Pharoah Art Gallery, learn about winemaking at Herold Wine Estate, and take in the architecture and atmosphere at St Mark's Cathedral.

For traveler tips, ratings, more things to do, and other tourist information, use the George road trip planner.

Traveling by bus from Plettenberg Bay to George takes 1.5 hours. Alternatively, you can drive. Plan for slightly colder nights when traveling from Plettenberg Bay in July since evenings lows in George dip to 8°C. Cap off your sightseeing on the 10th (Wed) early enough to travel to Durban.
more less

Things to do in George

Sunny weather and golden beaches await you on a vacation in Durban, a busy port city on the Indian Ocean known for its outdoorsy atmosphere.

Do some cultural sightseeing at The Buddhist Retreat Centre and St Luke's Anglican Church. You'll discover tucked-away gems like Scuba & Snorkeling and Sri Sri Radha Radhanath Temple. Venture out of the city with trips to Harold Johnson Nature Reserve (in Stanger), Barn Swallow (in Mount Moreland) and KartingKZN Galleria (in Amanzimtoti). categoryPhrases.sentence.On_the_day_dedicate_a_day_to_the_elevated_beauty_of Royal Natal National Park. There's still lots to do: admire the architecture and history at The Ramakrishna Centre of South Africa Durban, have unforgettable encounters with a shark diving experience, take in the exciting artwork at Makiwa Gallery, and ride a horse along Stormy Hill Trails & Tails.

You can fly from George to Durban in 2.5 hours. Alternatively, you can drive; or take a bus. Expect somewhat warmer temperatures when traveling from George in July; daily highs in Durban reach 27°C and lows reach 16°C. Wrap up your sightseeing on the 16th (Tue) early enough to travel to Hazyview.
more less

Things to do in Durban

A gateway to the popular Kruger National Park, Hazyview boasts an enviable location in South Africa's lowveld, surrounded by a staggering number of both natural and historic sites.

For traveler tips, other places to visit, more things to do, and tourist information, refer to the Hazyview online travel route planner.

Things to do in Hazyview

Hoedspruit offers proximity to Kruger National Park and features an airport, making it a popular jump-off point for a variety of tours and safaris.

Satisfy your inner culture vulture at Haenertsburg Cemetery and iNyoka Art Gallery. You'll explore the less-touristy side of things at Moholoholo Animal Rehabilitation Centre and Ukuthula Arts & Craft Shop. Change things up with a short trip to Qualito Craft Distillery in Phalaborwa (about 54 minutes away). Next up on the itinerary: stroll through Hoedspruit Endangered Species Centre, browse the exhibits of Kingfisher Gallery, get outside with Siyafunda Conservation, and relax and rejuvenate at some of the best spas.

Take a bus from Hazyview to Hoedspruit in 1.5 hours. Alternatively, you can drive. Expect a daytime high around 26°C in July, and nighttime lows around 10°C. Finish up your sightseeing early on the 27th (Sat) so you can travel to Kruger National Park.
more less

Things to do in Hoedspruit

One of Africa's largest game sanctuaries and part of UNESCO's Man and the Biosphere Program, Kruger National Park provides an immersive experience of wildlife.

Get in touch with nature at Game drives at Phalaborwa Gate in Kruger National Park and Lonely Bull Trail. The adventure continues: tour the pleasant surroundings at Olifants Wilderness Trail, trek along Bushmans Trail, delve into the distant past at Masorini Archaeological Site, and get great views at Nkumbe View Site.

To see other places to visit, more things to do, ratings, and tourist information, you can read our Kruger National Park journey builder website.

You can do a combination of bus and taxi from Hoedspruit to Kruger National Park in 2.5 hours. Alternatively, you can drive. In July, plan for daily highs up to 26°C, and evening lows to 10°C. Cap off your sightseeing on the 1st (Thu) early enough to travel to Musina.
more less

Things to do in Kruger National Park

©
Musina or Messina is the northernmost town in the Limpopo province of South Africa. On the 2nd (Fri), stroll through Musina Nature Reserve and then examine the collection at Mapungubwe Museum.

Plan my trip to Musina with suggested itineraries provided by Inspirock.

Drive from Kruger National Park to Musina in 5 hours. Cap off your sightseeing on the 2nd (Fri) early enough to travel to Bela Bela.
more less

Things to do in Musina

Taking a trip to Bela Bela allows visitors to enjoy mild weather and many hot springs.

Visiting Adventures with Elephants and Welgevonden Nature Reserve will get you outdoors. Step off the beaten path and head to Mabalingwe Nature Reserve and L'abri Farm Shop and Brewery. You'll find plenty of places to visit near Bela Bela: Jugomaro Predator Park (in Groblersdal) and The Black Mamba (in Vaalwater). There's more to do: get a taste of life in the country at Geluksfontein Goat Cheese Farm.

Traveling by car from Musina to Bela Bela takes 4 hours. Alternatively, you can do a combination of car and flight. In August, plan for daily highs up to 26°C, and evening lows to 4°C. On the 6th (Tue), you'll have the morning to explore before heading back home.
more less

Things to do in Bela Bela