©
Plan created by another user. Make it yours 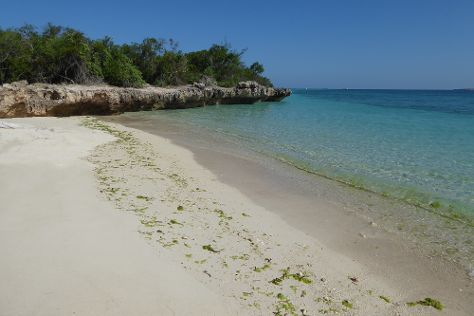 Founded in the mid-19th century, Dar es Salaam, Tanzania's largest city, lost the status of the official capital but remains the country's commercial and financial center.

Shop till you drop at The Slipway Shopping Centre and Kivukoni Fish Market. Get a sense of the local culture at National Museum and Old Boma. Step out of Dar es Salaam with an excursion to Kaole Ruins in Bagamoyo--about 1h 40 min away. And it doesn't end there: kick back and relax at Coco Beach, look for gifts at The Tanzanite Dream, buy something for everyone on your list at Sea Cliff Village, and stop by Mwenge Woodcarvers Market.

To find where to stay, ratings, maps, and more tourist information, you can read our Dar es Salaam trip itinerary planner.

If you are flying in from Portugal, the closest major aiports are Julius Nyerere International Airport and Abeid Amani Karume International Airport. In August in Dar es Salaam, expect temperatures between °C during the day and °C at night. Wrap up your sightseeing on the 20th (Fri) early enough to travel back home.
more less

Things to do in Dar es Salaam